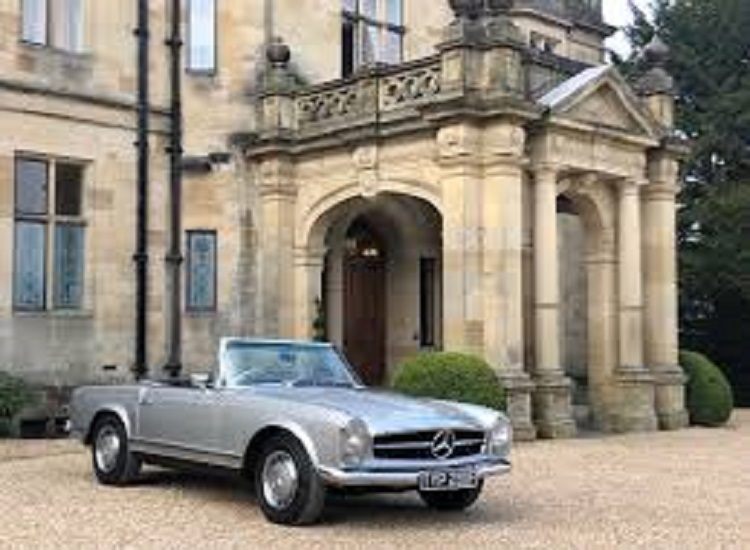 The Mercedes Benz was designed by Paul Bracq. Bracq went on to be responsible for a wealth of automotive design classics including the BMW 6 series. Also credited is Bela Barenyi, often known as the grandfather of passive safety best known for the development of the crumple zone and the collapsible steering column. Barney designed the distinctive concave hardtop of the Mercedes Benz giving rise to the car’s ‘Pagoda’ nickname.

The basic dimensions of the car enabled it superb handling as a result of the relatively wide-track chassis and short overall length. It had a powerful straight six-cylinder engine and coupled with lightweight aluminum panels it was a brisk performer. Barney worked hard to achieve a very strong structure for the vehicle with crumple zones and a rigid passenger ‘safety cell’ common to most modern cars but for its time many years ahead of the competition.

The 230SL was the first vehicle in the range to be built with a production run of 5 years from history. Nearly 20,000 vehicles were produced in this period with around a quarter destined for the US market nearly all equipped with an excellent 4-speed automatic transmission.

The Mercedes Benz has a 6 cylinder engine of 150hp that was offered to give a strong and dependable performance. There is a famous account of a Mercedes Benz putting in impressive lap time on race circuit against a v12 Ferrari of only two-hundredths of a second less.

The 230hp was succeeded in Mercedes Benz. This particular vehicle was only produced for one year making it a rare and sought-after derivative. There were various suspension and mechanical upgrades, most notably the 6 cylinders Mercedes Benz engine which now had a longer piston stroke and a stronger 7 main bearing crankshaft. The increased stroke length helped to increase torque but peak power was unchanged. An interesting model was the California Coupe, with a detachable hardtop and no folding roof.

As expected this was a popular choice in the US particularly in, as its name would suggest, California. In the late sixties, numerous safety enhancements were introduced as a result of Barenyi’s research. Softer materials were used in the dash area and a collapsible steering column was standard.

The Mercedes Benz was introduced in the classic cars. By this time the car had gained some weight and in contrast to the earlier models was now more of a convertible grand tour than a sports car. A manual gearbox was offered to maintain some driver involvement but on the whole, most cars were automatically suiting the now matured Mercedes Benz character. Engines were upgraded now producing 170hp and providing relaxed and effortless performance.

It is often said that the Mercedes Benz is from a time when Mercedes Benz was ‘building their cars properly’, this has certainly helped the SL build an enviable reputation as one of the most prestigious and recognizable open-top sports tours in the world.